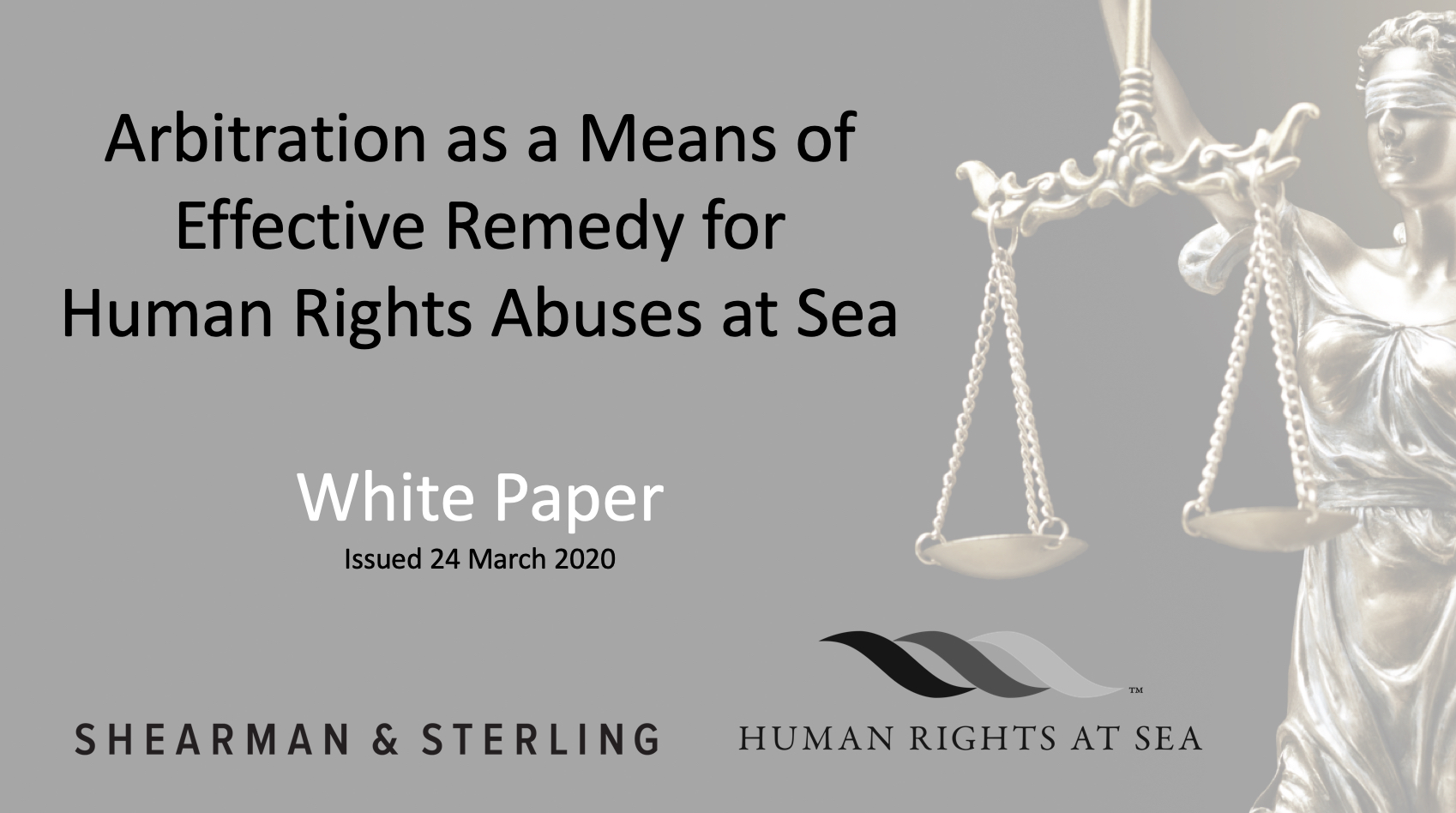 London, UK. Paris, France.  On the UN International Day for the Right to The Truth Concerning Gross Human Rights Violations and for the Dignity of Victims, the UK-based charity Human Rights at Sea, in partnership with global law firm Shearman & Sterling LLP, is today launching a jointly developed legal project to facilitate the resolution of disputes concerning human rights abuses at sea using international arbitration.

The project’s principal aim is to provide victims of human rights abuses at sea with access to an effective remedy, while at the same time combating impunity for the perpetrators of such abuses.

This project follows from Human Rights at Sea’s broader efforts to globally promote and develop more effective human rights protection for seafarers, fishers, migrants, refugees and others working, or living in the littoral and maritime space.

As described in Human Rights at Sea’s founding documents and most recently asserted in the first version of the ‘Geneva Declaration on Human Rights at Sea’, the philosophy of human rights at sea rests on four fundamental principles: that human rights apply at sea to exactly the same degree and extent that they do on land; that all persons at sea, without any distinction, enjoy human rights; that there are no maritime-specific rules allowing derogation from human rights standards; and that all human rights established under treaty and customary international law must be respected at sea.

At present, these fundamental principles are not being adequately respected, complied with or enforced.  There remains significant evidence of widespread and systematic human rights abuses at sea, including slavery, sex trafficking, sexual assault, abandonment, and deprivation of basic labour rights.

The project is driven by the concept that an arbitration-based mechanism of redress for human rights abuses could significantly improve human rights protection in the maritime space, notably, by providing: (i) a neutral and visible forum in which human rights issues can be resolved; (ii) an efficient procedure that is both expedient and financially accessible to victims; (iii) an adjudicative process that is highly specialized and tailored to the sensitivities of human rights issues as well as to the particularities of the maritime space; and (iv) binding arbitral awards that would be enforceable internationally.

The arbitration mechanism under development is designed principally to improve the situation of victims of human rights abuses at sea.  The goal is to provide victims with an additional mechanism of redress, alongside those that already exist (such as national or regional courts), in which they can choose to bring their human rights claims.

At the core of this arbitration-based mechanism would be a network of stakeholders active or directly interested in maritime commerce, including flag States, port and coastal States and businesses.  A critical mass of players representing some or all of these interests will be invited to provide open offers of consent to arbitrate human rights disputes.  Such offers would be capable of acceptance by any party alleging a human rights abuse by the offeror, through the aggrieved party’s filing of an arbitration claim.

The ensuing arbitration proceedings would be administered by a dedicated ‘human rights at sea’ arbitration institution, which would, among other things: promulgate a set of procedural rules specifically tailored for human rights disputes; maintain a roster of specially qualified human rights arbitrators; and oversee the constitution of arbitral tribunals (including by resolving any challenges to the appointment of arbitrators).

To foster global awareness of this project, and to ensure that it attracts the necessary involvement and feedback, not only from the necessary stakeholders, but also from interested international organizations such as the United Nations, the project will be launched through a series of successive and iterative steps.

This first stage, which marks the project’s formal launch, is the circulation of a White Paper setting out the broad parameters of the arbitration-based mechanism of redress being proposed.

Based on the feedback gathered from discussion of the White Paper, as well as further independent study by Human Rights at Sea and Shearman & Sterling LLP, the concept will be further developed in subsequent stages, including through the circulation of draft model offers of consent, draft model arbitration agreements and draft arbitration rules.

Human Rights at Sea’s CEO, David Hammond commented: “Following seven months of development, this innovative commercially focused concept to evolve arbitration as a route to effective remedy and a means for enforcement against perpetrators of human rights abuses at sea, is now ready for disclosure to the international community. The original concept, born through our partnership with Shearman & Sterling LLP, is a ground-breaking development aimed at empowering victims of abuse to gain often much-needed access to justice.”

Dr. Yas Banifatemi, Partner at Shearman & Sterling LLP and Co-Head of the firm’s International Arbitration Group adds: “The project we have co-developed with Human Rights at Sea is a groundbreaking development, not only for the protection of human rights internationally, but also for the practice of international arbitration.  This is yet another example of the significant value that arbitration has, among other ways, in helping to bring justice and the rule of law to people and to spaces that may not otherwise have sufficient access to them.  We are very proud of this effort and are excited to see how it will progress through the next stages of development.”

UN International Day for the Right to the Truth Concerning Gross Human Rights Violations and for the Dignity of Victims:   https://www.un.org/en/observances/right-to-truth-day